Monday was not only President's Day, but also "Mid-Winter Break" at school.  Which cracks me up, because here in the Mitten we usually have enough snow days that at least one should qualify as a Mini-Mid-Winter break, but hey- I won't complain about a day off!  My good friend Michelle came over with her three kids to play for the day.  It was a great day!

Another thing that has kept us busy lately is Potty Training- but this time around, with such success!  I am proud to say that Lauren & Hannah have successfully become Potty (& poopy!!!) Trained!!!

If you don't care to read about Potty Training, I completely understand- just skip on down, friend!

A few months ago Lauren was showing signs of readiness.  I gave it the ol' college try, but ended up stopping.  She was not progressing as fast as I thought she was; the house was still under construction so the others would use our time in the bathroom to get into trouble; and I was getting frustrated.  Many moms I talked to said to just wait a few months and try again when there was interest.  A friend recommended putting the potties out in the open instead of using the bathroom.  So I followed those tips, and BOOM- one day the girls were ready.

How did I know?  Well, they both kept on ripping off their diapers.  Over and Over and Over.  I quickly I realized it was because they wanted to potty like a big girl- and so away we went!  I already had the potty and lysol wipes, but I did not do any type of reinforcer other than praise for potty.  They simply loved the cause & effect of it!

I also used an OT-ish technique of breaking down the task & allowing them to master each step before progressing to the next.  With the first try, I had Lauren wear underwear and ended up washing them a LOT and even throwing a few pairs away.  This time, I let the girls run around naked on the lower half for days as they learned that urge=gotta go!  I wanted quick success with no pants or undies to get in the way.
Once they were successfully going potty on the toilets with little to no accidents on floors, I added pants.  I only gave them pants that were easy to get on & off (still, no undies) and had a stack of extra pants within reach for when there were accidents.  They had to learn to pull pants down and pull them back up (or put them back on) after going potty.  Hannah is quite the diva who does not like being told what to do at all.  At first when she balked at the idea of pants, I just gave her the choice: would you like the pink or purple pants?  That made it all ok ;)
Once they mastered pants, I finally added undies.  We also started using the bathroom toilet more, which they prefer.  They are doing awesome and while we still have some accidents, overall they are about 95% there.
OK, so quickly I need to mention poops- for those, I did use bribery positive reinforcement.  I do NOT like cleaning poo out of my brand new carpets and was desperate to stop that asap.  I told the girls that if they went poop on the potty, they would get a cookie.  It was an Oreo- very, very high stakes since we never usually have those around!  Within 3 days all poops were in the toilet for both girls!  However, my resident Diva took it to the next level- she was able to control her poo to have 5-6 small bowel movements throughout the day to try to maximize the cookie thing.  I quickly addressed that one, telling her only cookies for bigger poops.  Smart girl-- she might be the death of me, lol!  The cookies are almost gone and yesterday both didn't even ask for them any more, so I think that means we have mastered the poop training, too!

Hope you get to enjoy some time with family and friends this season!

Last week our family made a HUGE change-- After 14 years working bravely as a Police Officer with the Grand Rapids Police Department, Andy decided to make the leap and turn in his badge to pursue his tree care business full time!!!

Before he officially retired from the Police Department, we got some great photos of the kids with daddy in uniform.  The little ones will probably have little to no recollection of their daddy the Police Officer as they get older, which is a weird thought to me since the GRPD has been such a part of our life!  Especially when they were born, there was SO MUCH support from not only the other Officers and their families, but also from the support staff and people we met through their birth.

Over the years Andy has worked third shift street patrol, the Vice Unit, and Community Policing.  He has seen a lot in his 14 years, and he has made a ton of close friends at the department.  There are so many good people who work hard there every day, and Andy has already told me how much he misses them.  The third shift rotating schedule, however?  No, I admit we do not miss that at all! 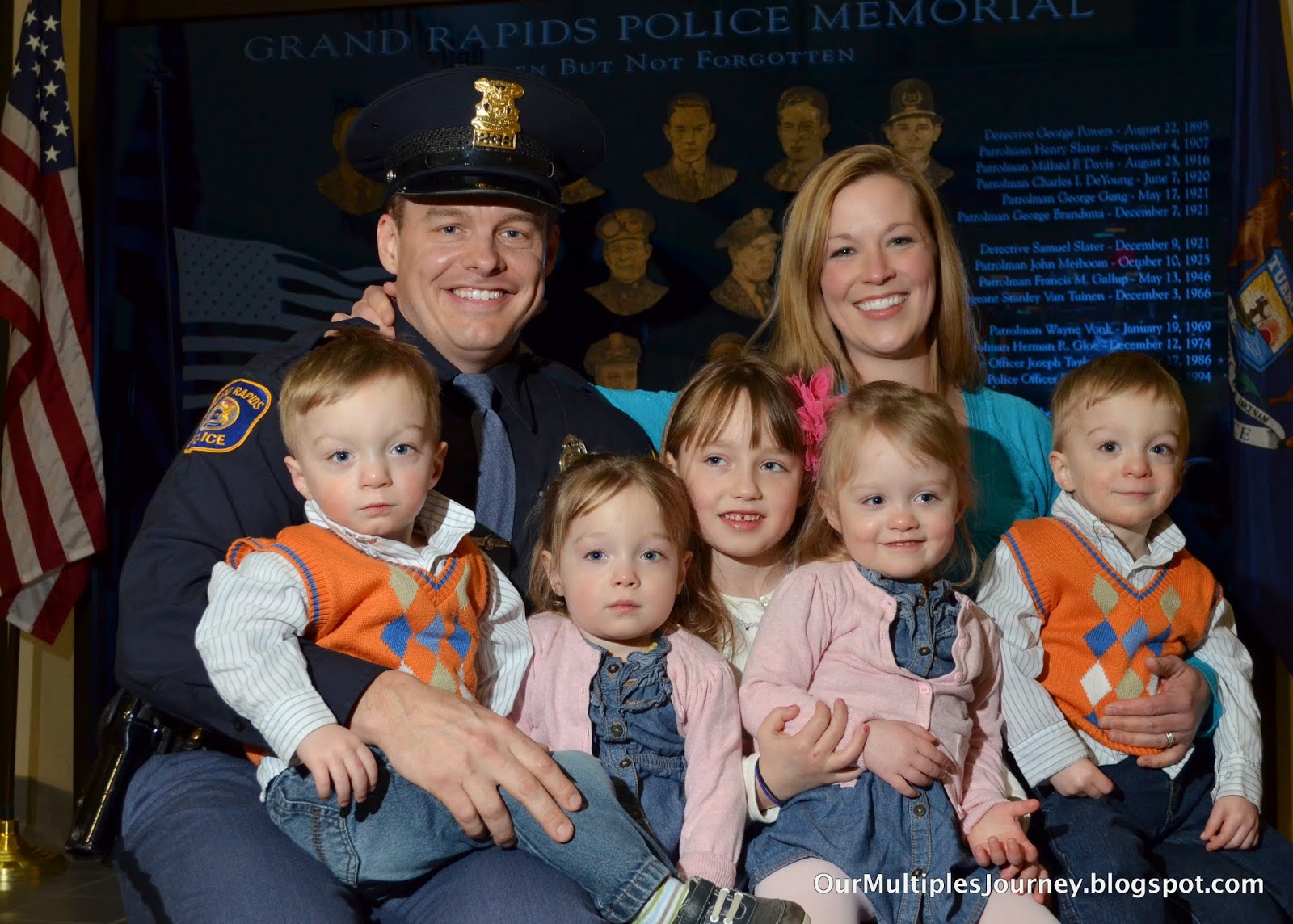 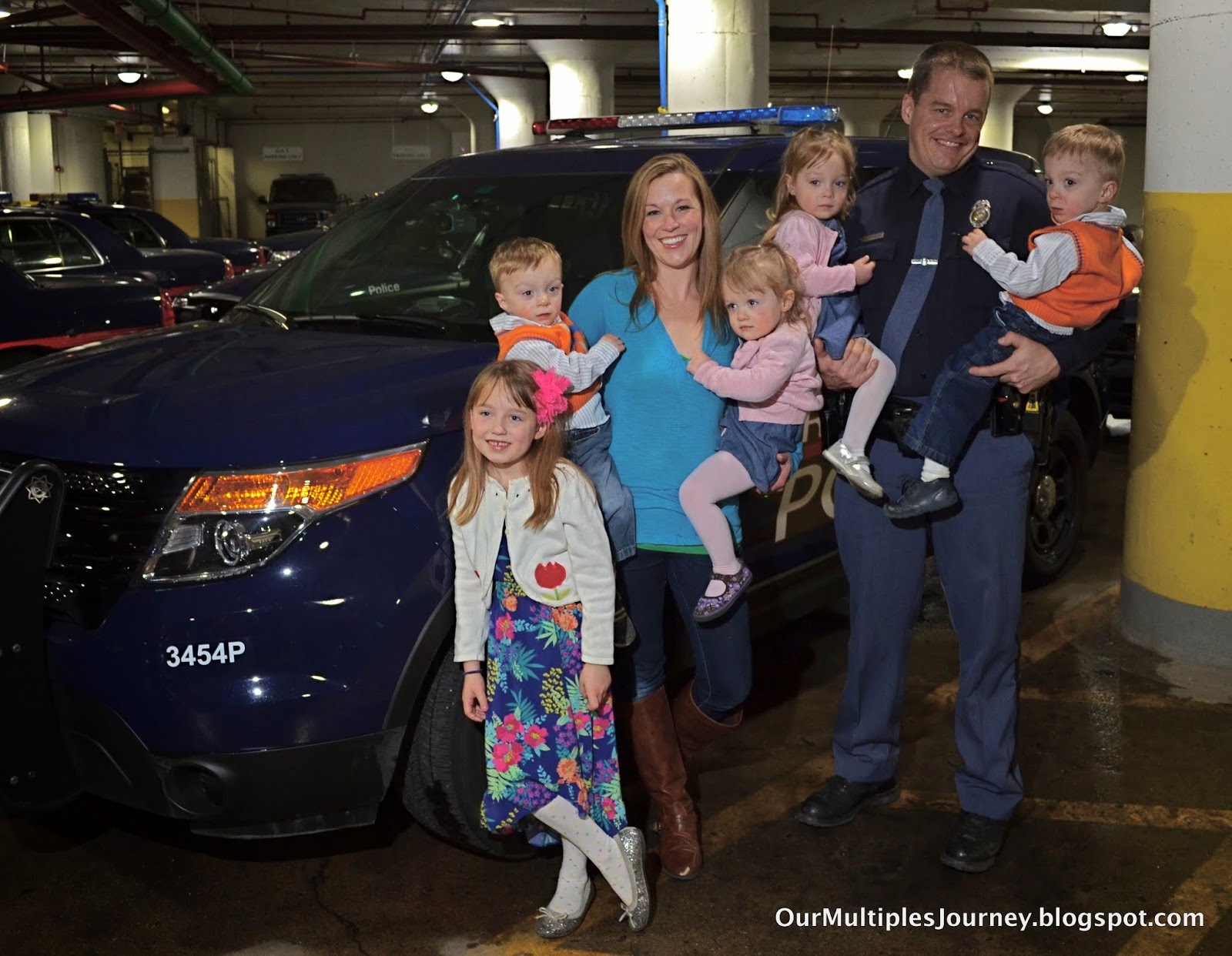 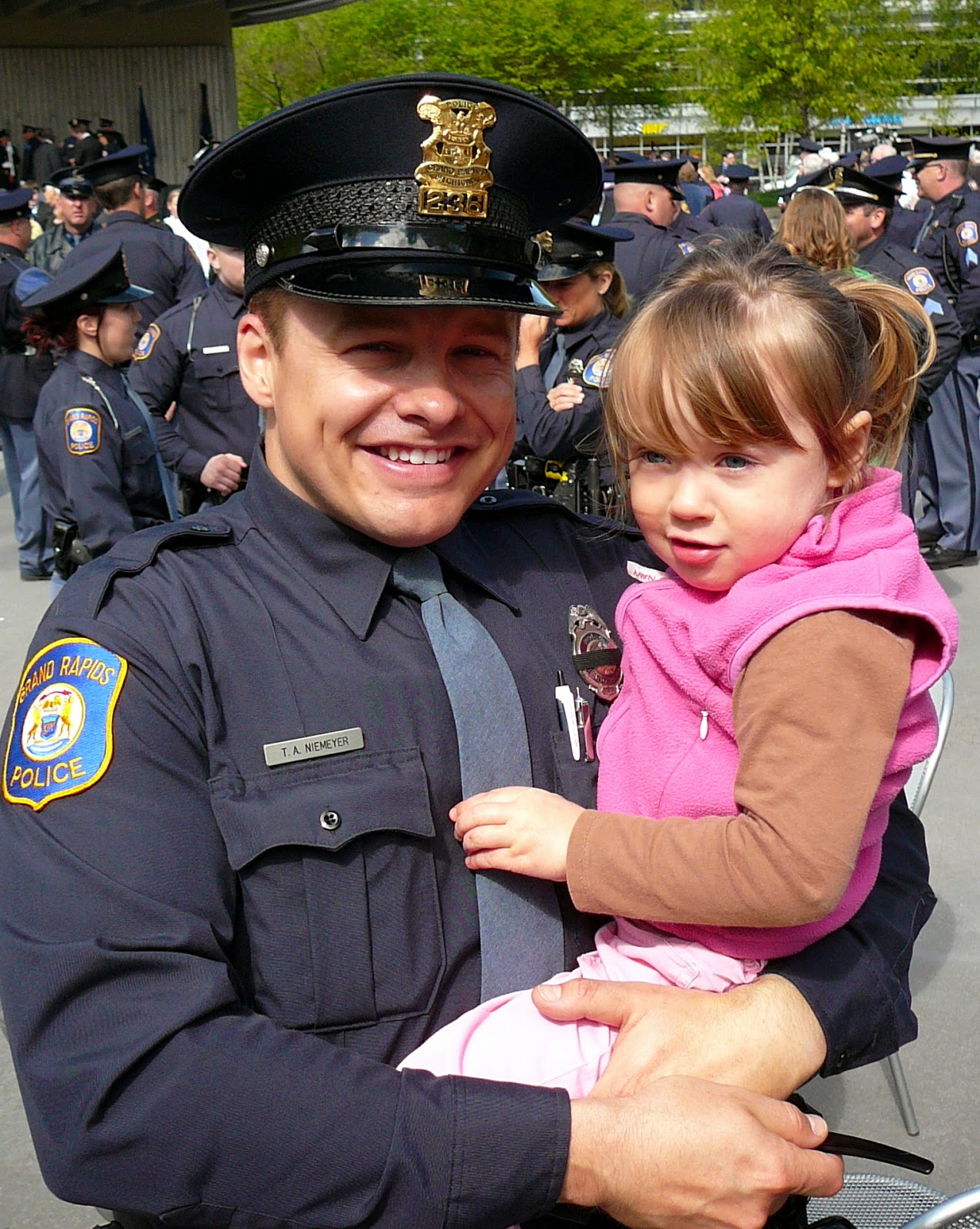 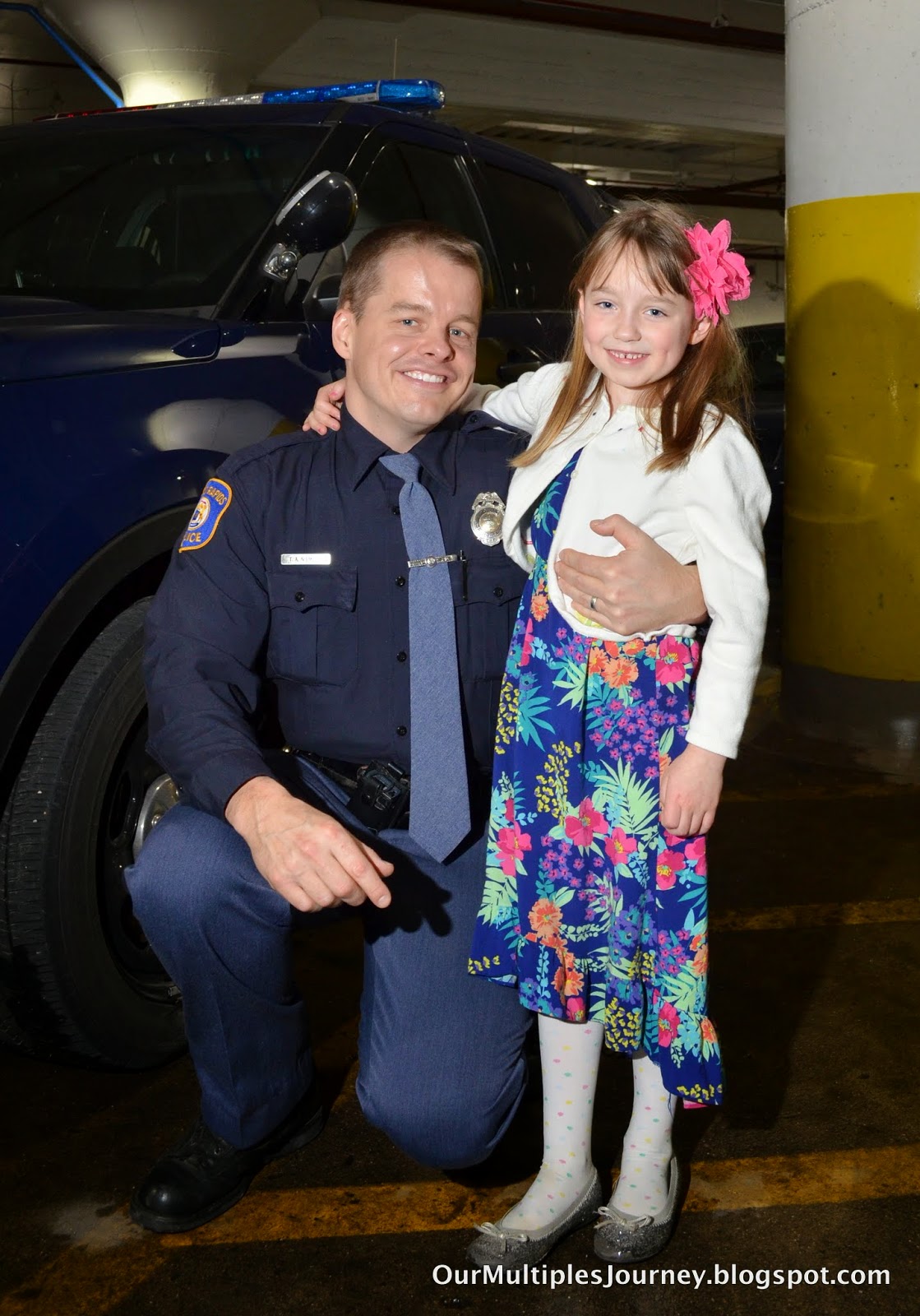 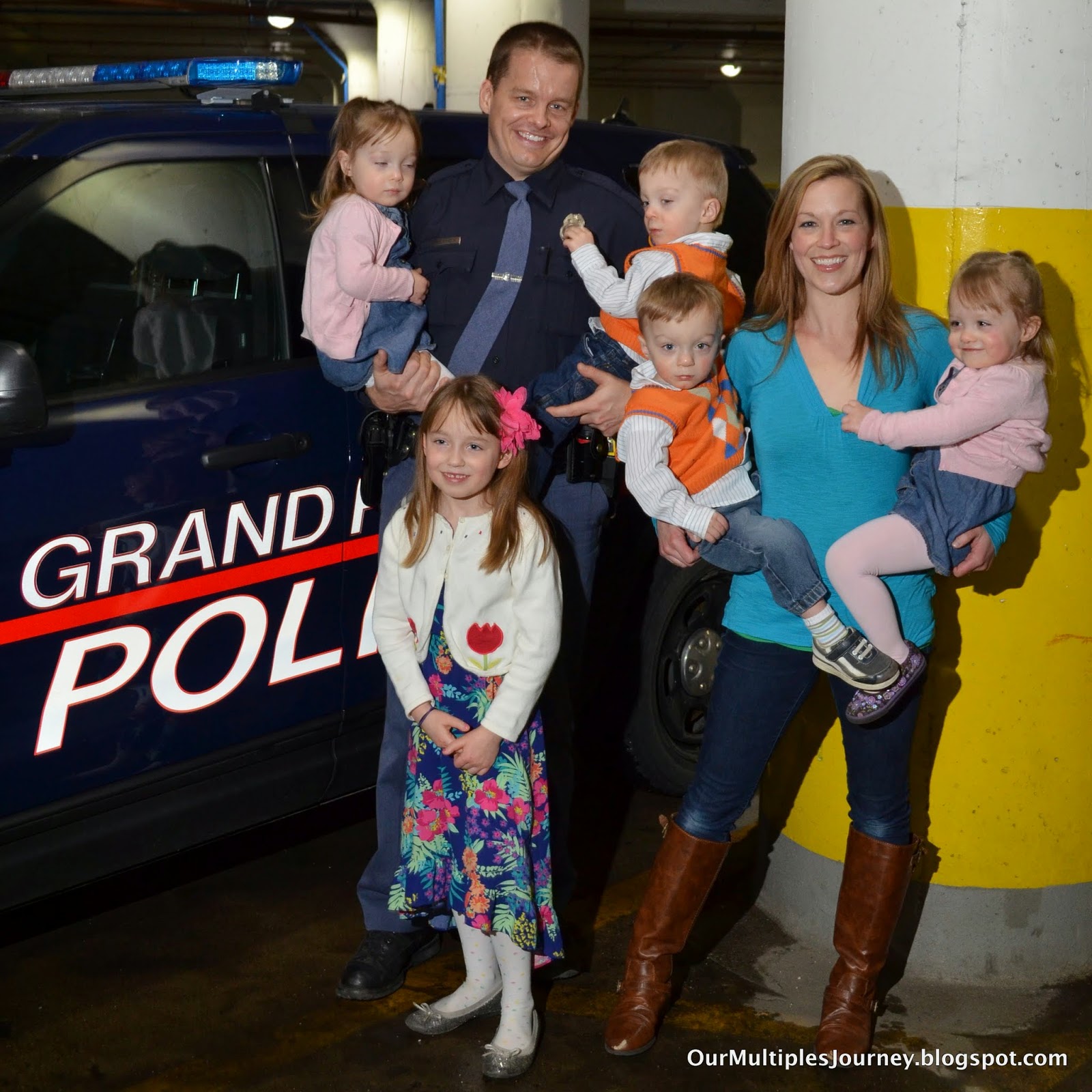 This has been a decision Andy and I have been discussing and praying about for several years now.   I am immensely proud of him and every person who works at the department.  Immensely grateful, Immensely honored, Immensely proud.   It is such a difficult job.  I think there will be aspects of the job we both miss, especially the people and the wonderful community of support Police Officers and their families have.  This will forever be a part of us.

So why the change in career?  I probably don't need to tell you being a Police Officer can be a very thankless, high-stress job.  Andy is an active, dare I say thrill-seeking person to begin with, and so when he started tree work as a hobby I was not surprised.  What did surprise me, however, was how much he enjoyed it!  As his expertise and skills grew, Oak Meadow Tree Service flourished first as a part-time job and then as a career.
Last year Andy arrived to the point where he was so busy with trees that he could not physically do both jobs.  He literally was working all day and all night & slept much less than his body needed (going to a night of Police work after cutting trees all day is not fun).  Not to mention the kids and I missed having him around!  We knew the time had arrived to make the change. 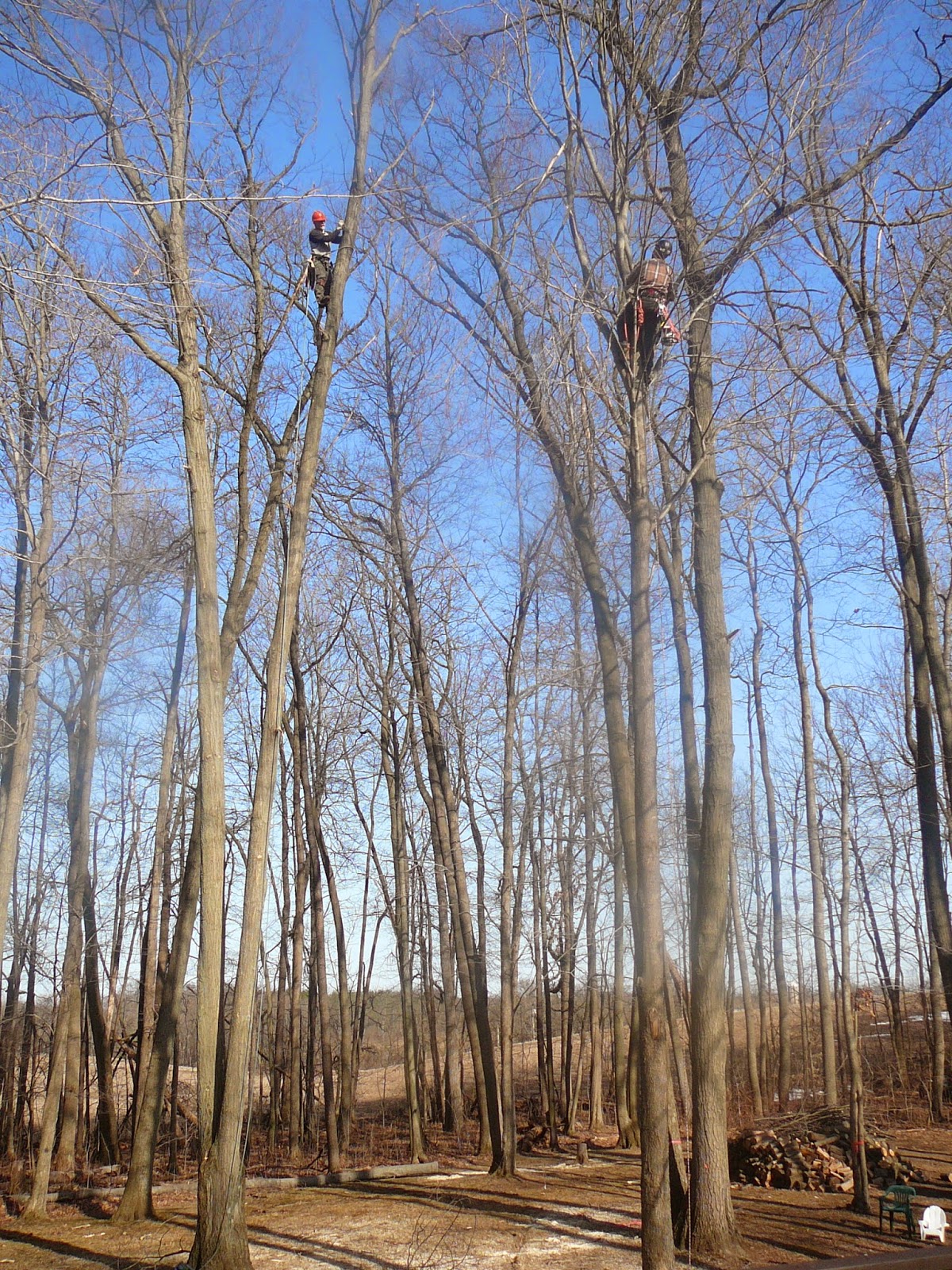 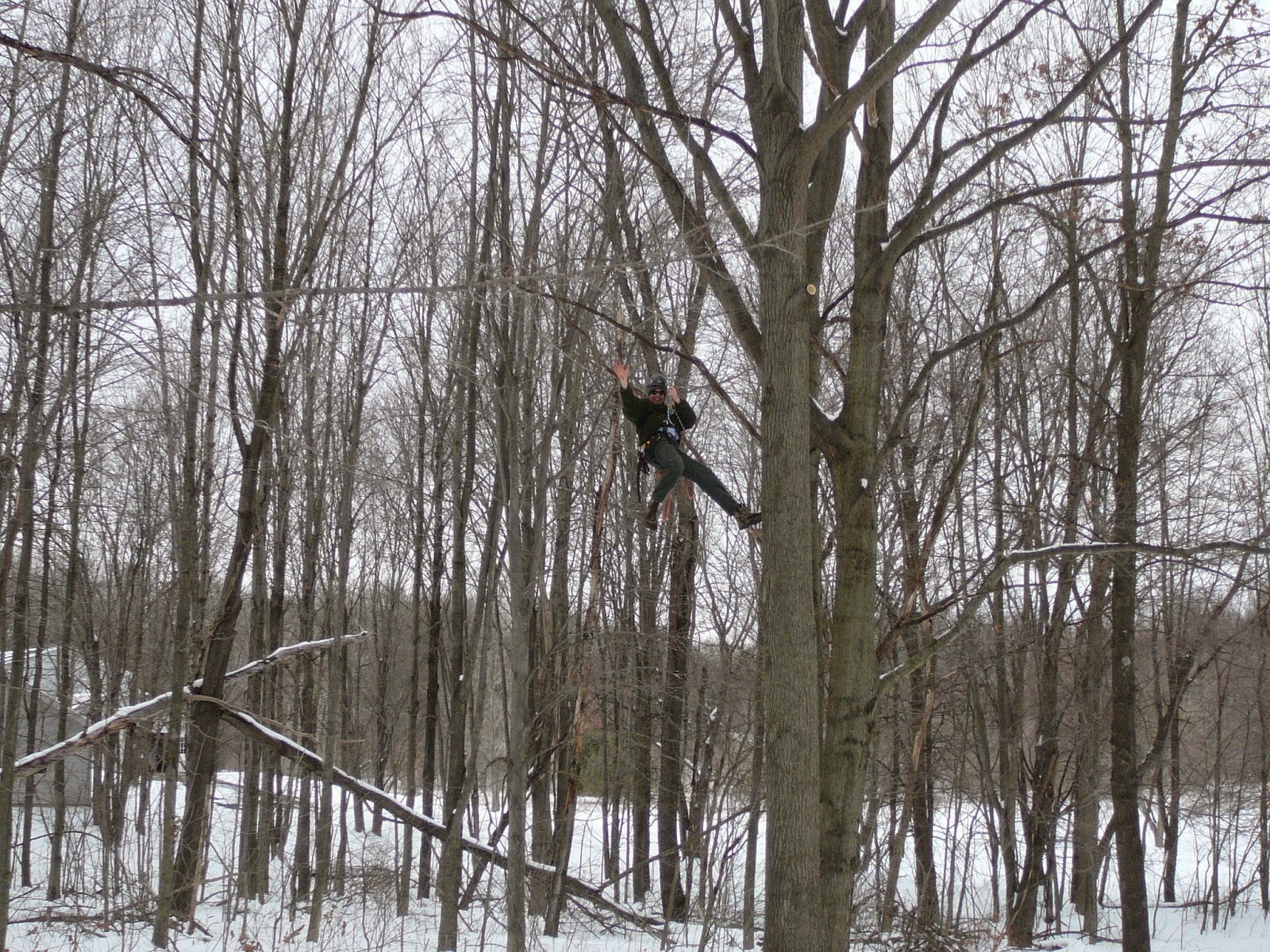 Hanging around in our yard :) 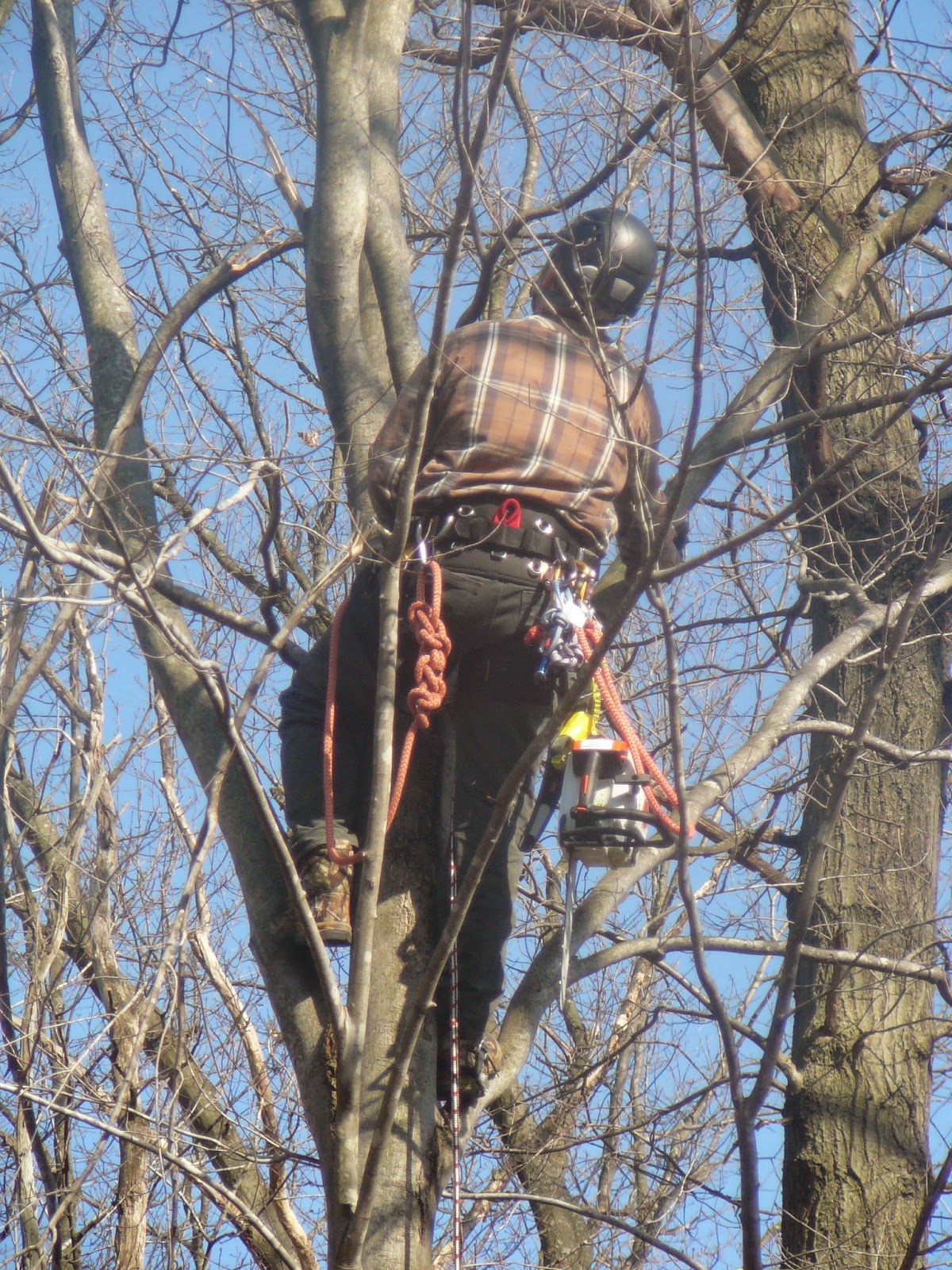 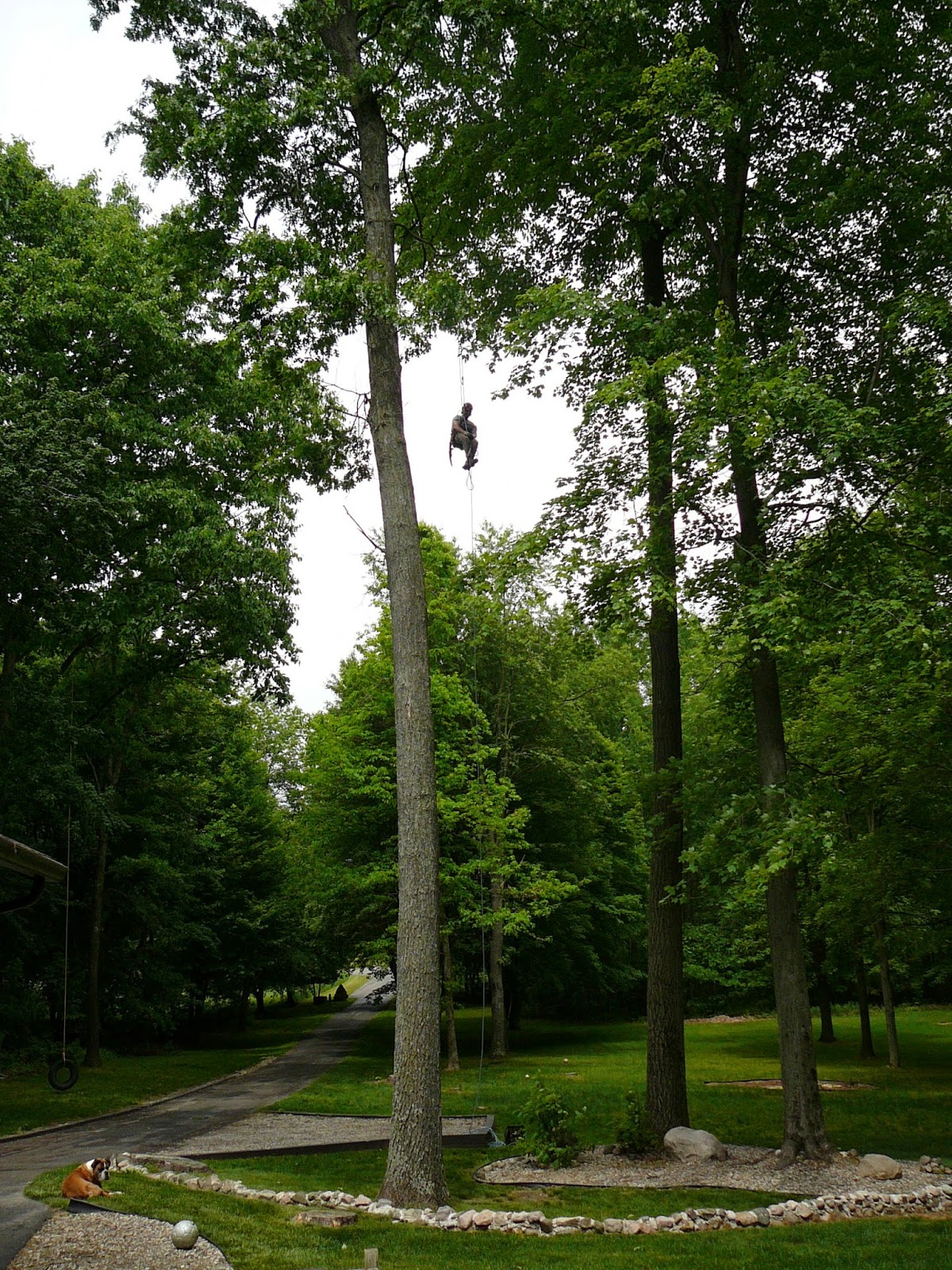 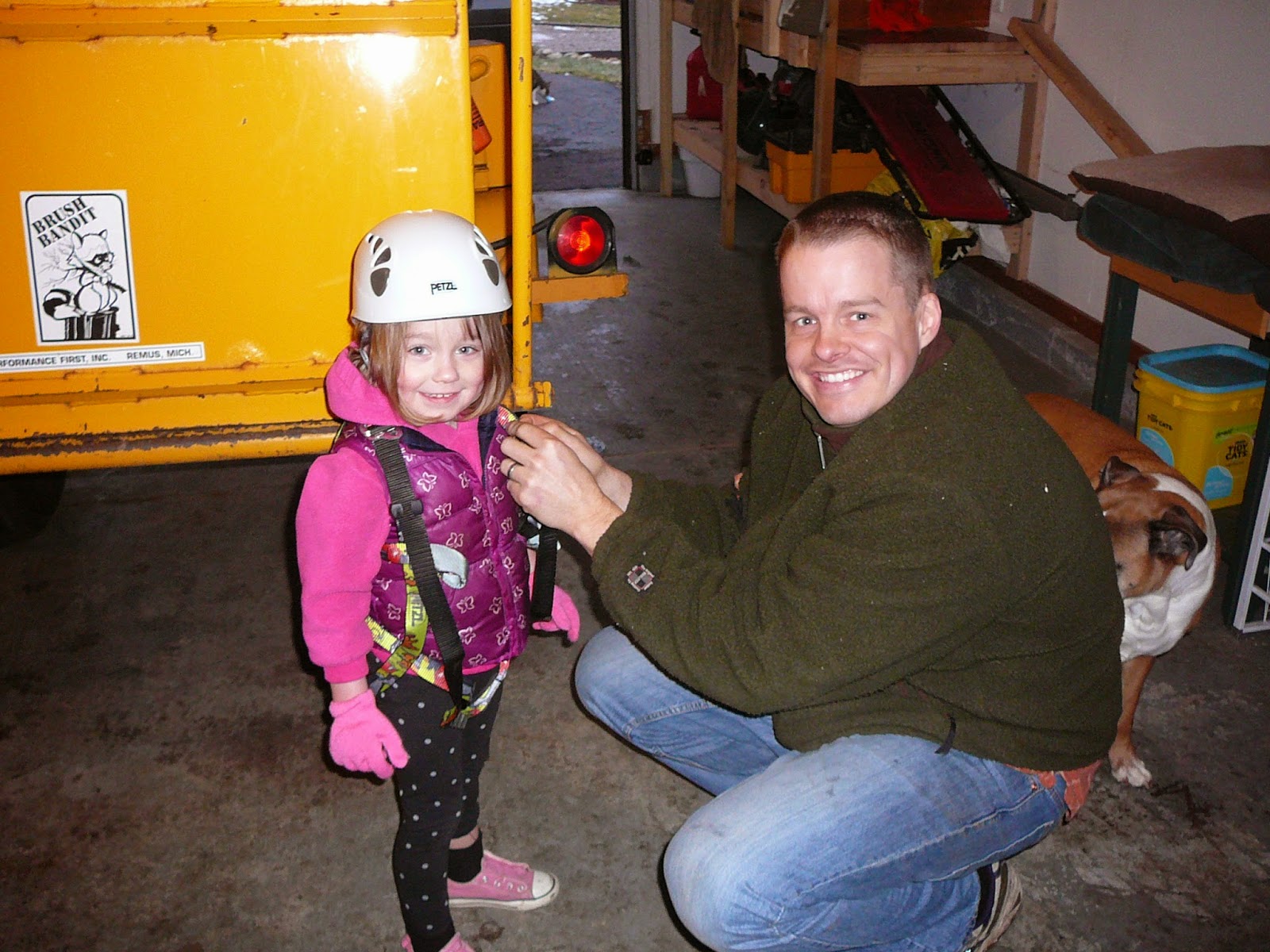 Safety First!!!
Daddy and Jenna playing in the trees 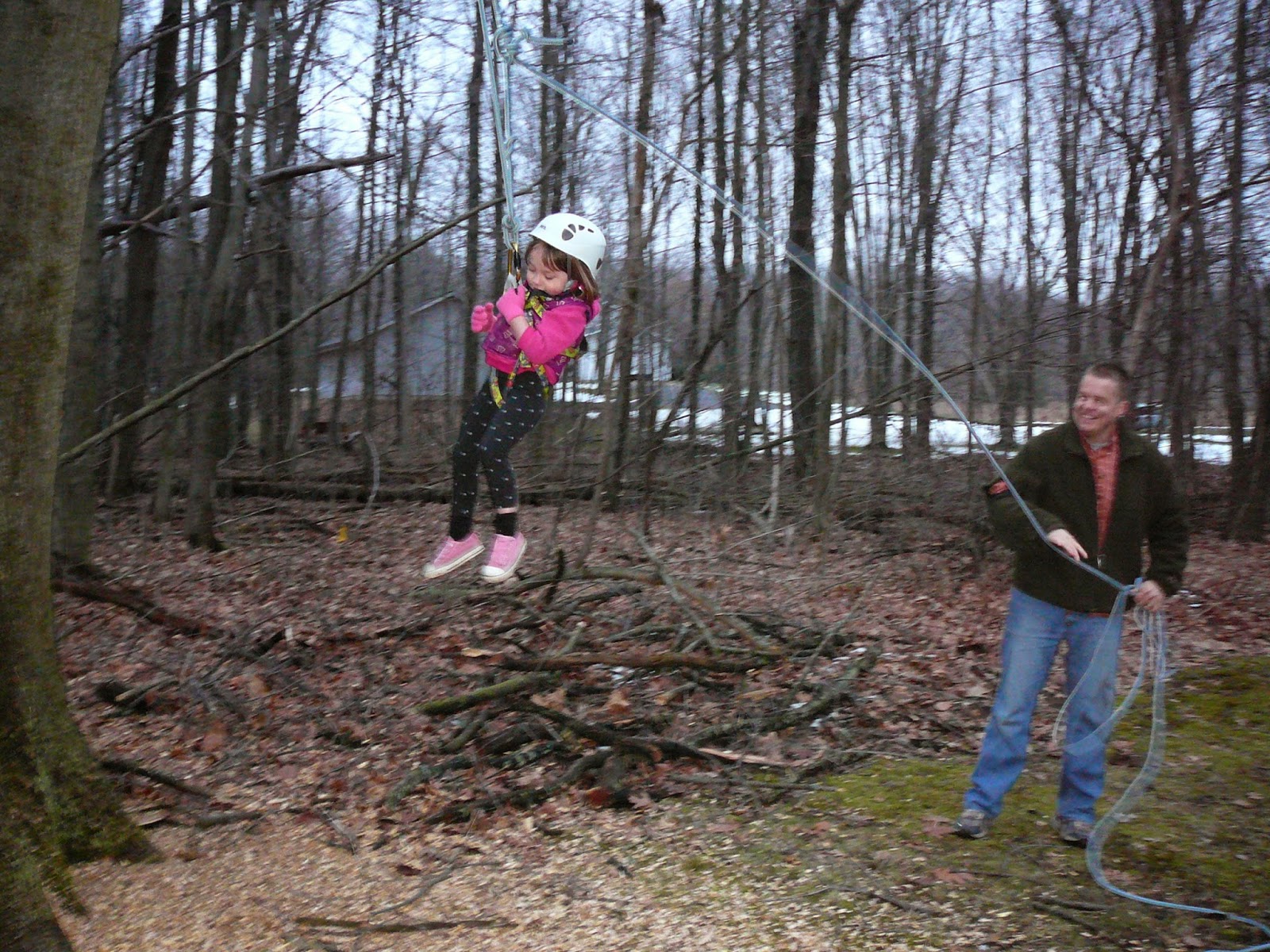 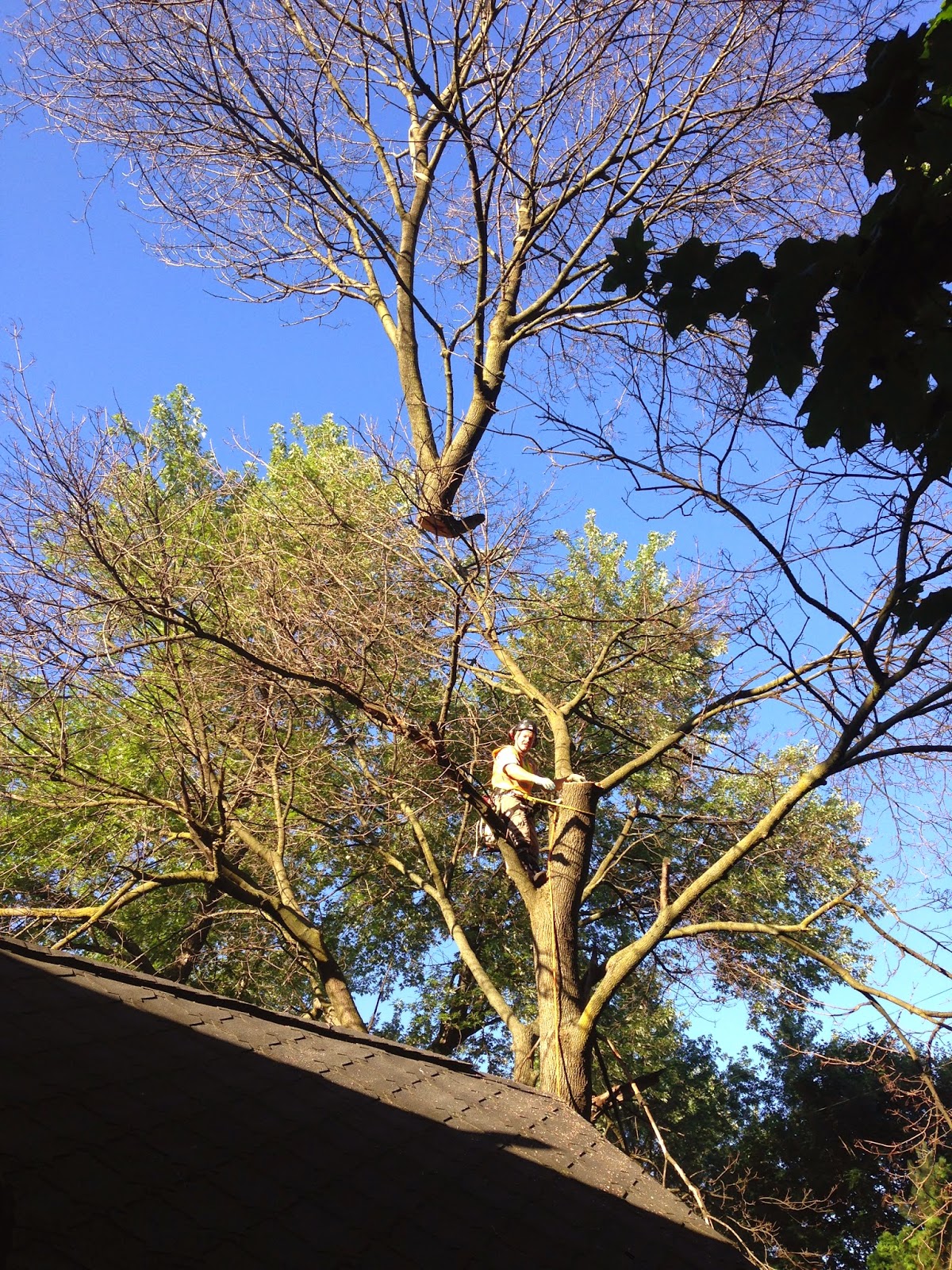 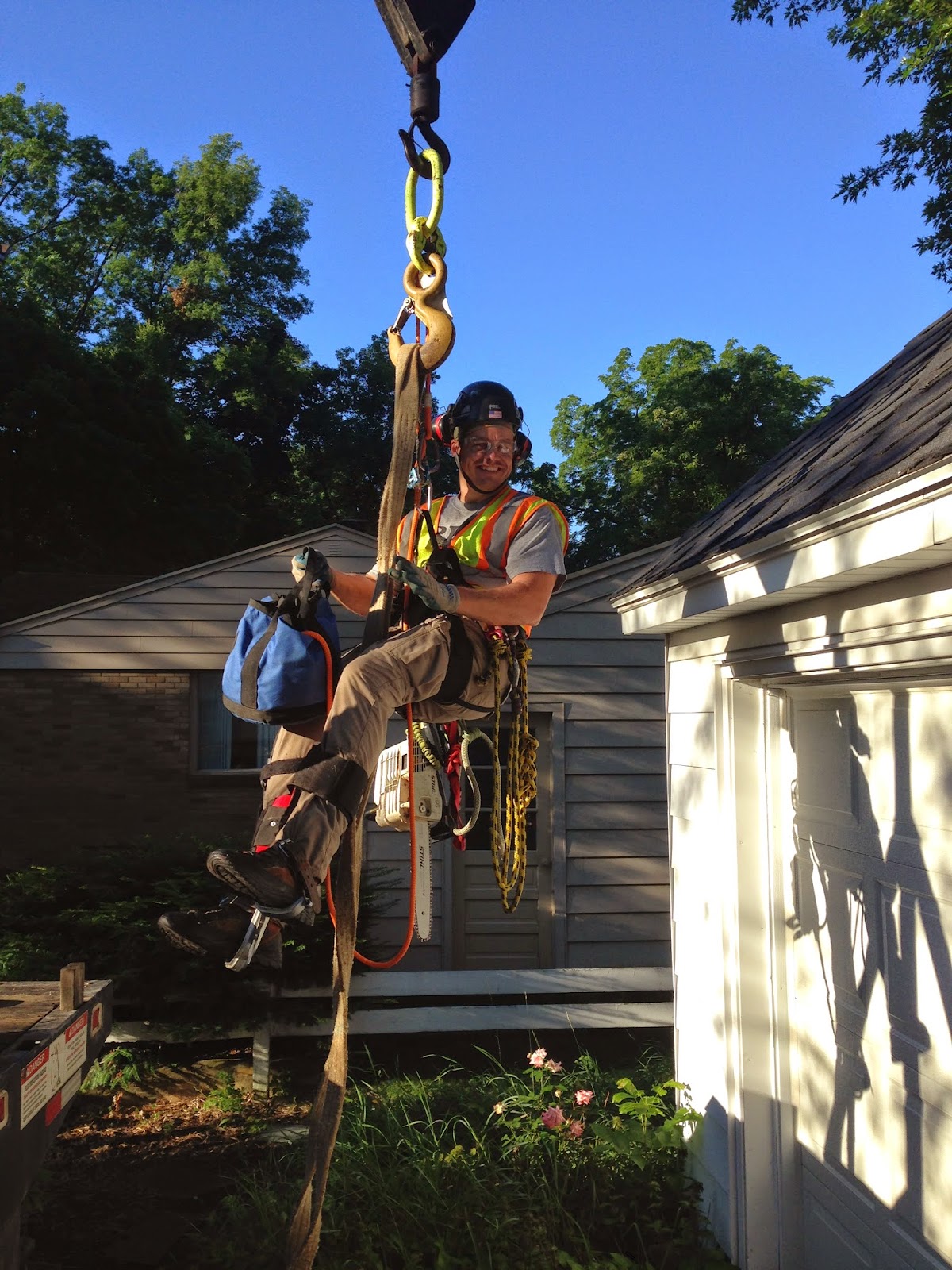 Using a crane to remove a dead Maple tree

We are excited to start this new phase of life.  While we know it is a giant leap of faith, we trust God will provide.

If you live in the West Michigan area and are in need of tree service, storm damage clean-up, or tree care feel free to browse the Oak Meadow Tree Service website here and give Andy a call!

(of course I needed to end this blog with a plug!!!)